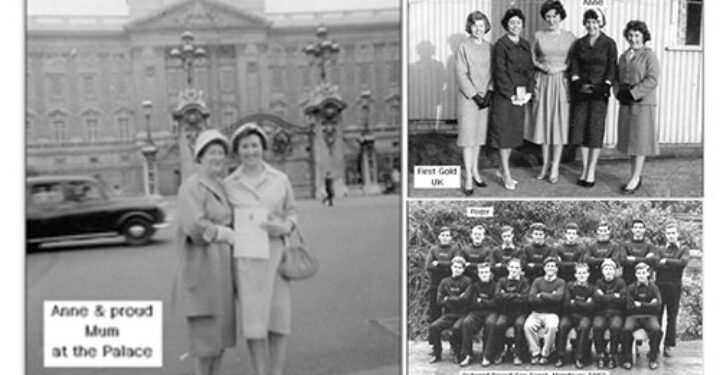 The D of E was educated at Gordonstoun. Founded in Scotland by Kurt Hahn after he fleed the Nazis, Gordonstoun was a school that emphasised physical fitness and an appreciation of nature. In 1941, Kahn established Outward Bound, a form of education focused on outdoor activities, physical fitness and teamwork. The D of E was patron of Outward Bound for many years. It was this program that led to creation of the Duke of Edinburgh Awards in 1956, led by Sir John Hunt of Mount Everest fame.

In 1960, Anne was part of the first female cohort to take part in and complete the D of E’s Award program. As a result, she and others from Beaconsfield Youth Club were invited to Buckingham Palace to meet the D of E and receive their Gold Award.

Inspired by Sir John Hunt and sponsored by the Rotary Club of Beaconsfield, in the same year, Roger took part in ‘Outward Bound’ at the Aberdovey Sea School. Cold showers, no smoking, no grog, abseiling, long treks in the rain and time ‘training’ on a ship in the Irish Sea – an unforgettable experience.

The youth programs introduced by Kurt Hahn and Sir John Hunt and endorsed by The Duke of Edinburgh have had a huge impact on young people around the globe. We feel lucky to have been among them.