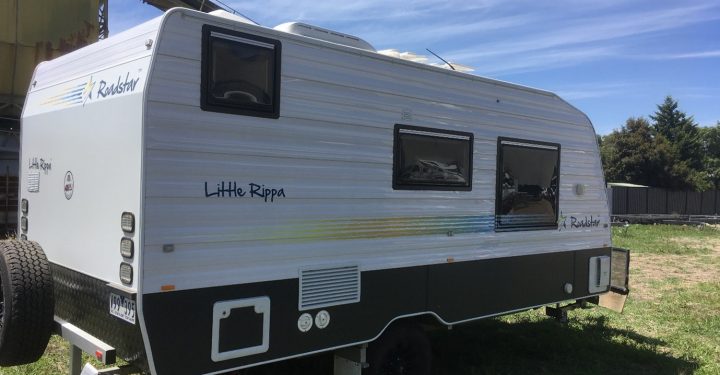 Having recently ventured into the world of caravanning, I have some experiences and tips to share with others about to embark on this adventure.

We’re now on our third ‘rig’ in around 10 years: we started with a Pioneer camper (for which our car was unsuitable); moved on to a Concept ‘Vision’ with an awkward east-west bed; and are now enjoying our Roadstar ‘Little Rippa’, which is everything the other two rigs were not.

When it comes to your rig, the first lesson is to do your research, both on the van you want and the car you will be towing it with. Get familiar with the acronyms ATM (Aggregate Trailer Mass – not those holes in the wall!), GCM (Gross Combined Mass), and TARE weight (which is not the amount of tar the van can carry!). If you’re a member of a motoring association, their technical helpline can be an invaluable source of free advice. For those with a computer, the internet offers easy access to information.

Our first trip in the Concert was over Christmas in 2018, when we stayed in Lorne at the park behind the supermarket. The park was full and the sites so tight that the roads often merged with people’s sites. Manoeuvring around kids’ bikes and tent ropes really tests the concentration!

Our second trip was to Cobram. The fun and games started at Woori Yallock. As we waited to turn onto the Warburton highway, the guy in the car next to us began gesticulating wildly. I put two and two together and decided to pull over. Turns out our bike carrier had failed and nearly turned my wife’s bike into scrap metal. Tip: bring OCCY straps for dramas like these… or get a competent person to fit your carrier!

After checking in at Cobram, we proceeded slowly towards our site. As we inched along, a young boy appeared at my window holding a front bike wheel, which had decided to part company with the wife’s bike at the first speed hump. The next day we were wakened at 5.00 am by the most violent thunderstorm I have ever experienced. One thunderbolt nearly took out the van – but it never leaked a drop.

Being handy and with time on my hands, I decided to ‘fix’ the caravan door. I had limited tools (and ability), but hey, why should that be an impediment? My wife offered to make me a coffee to soothe my nerves, but as luck would have it, the door slammed shut and nothing would budge it. I calmly explained that a simple exit through the largest window would suffice. From her reaction, you would have thought I’d suggested climbing the Matterhorn! I did offer to catch her delicate frame.

After a short collaborative discussion, it was decided to call the local caravan repairer for an onsite rescue. But this wasn’t to be, as his guy was out on another call. So, hitched up and with partner still in the caravan, I proceeded as quickly as I could to the repairer. After a few u-turns and much cursing, we arrived.

The repairer was skilful, and quickly got the door open and the wife out. He then took great pleasure in berating me for attempting a job only an ‘expert’ should tackle. Humble pie accepted and eaten!