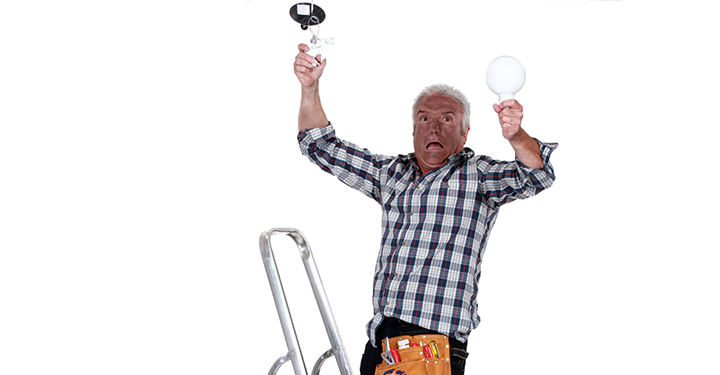 One day I was working with a foreman electrician, putting light bulbs into a series of pendant fittings eight feet above the ground.  We wanted to check that each globe was working, so we had the power on as we installed the globes.

My offsider moved the ladder to each location while I walked behind him, pushing the carton of lamps with my feet as I unwrapped the next globe. He climbed the ladder; I handed him the lamp; and he inserted it in the lamp holder. Suddenly, the ladder moved, and he lost his balance. He gripped the lamp too hard and it snapped, leaving him holding onto of a handful of filaments at 240 volts and unable to let go!

Realising what was happening, I kicked the six-foot aluminium ladder out from under him with my rubber boots. I was fine, but my offsider was unprepared for the three-foot drop, and received some bumps and bruises.  For my efforts, I was berated in some very colourful tradesmen language. Next time, I might get a second opinion on the best way to effect a rescue!