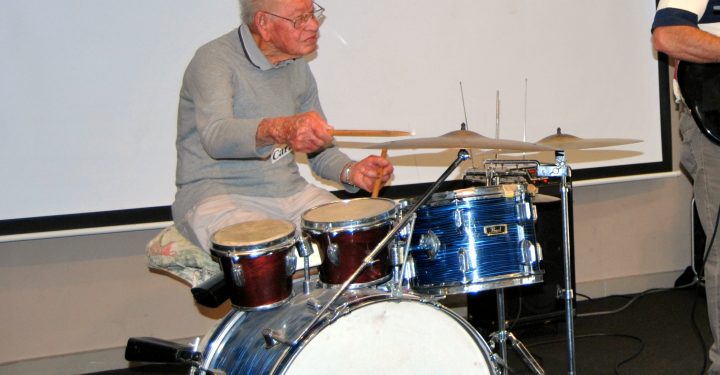 Carl still had the beat

Carl Franks died this year and was fortunate enough to have a strong family connection that allowed him to die at home at the age of 96. Carl was an active member of Older Men: New Ideas (OM:NI) men’s discussion groups. His last years saw him doggedly fight the ageing process as he cared for his beloved wife. Caring for his wife in the mornings precluded him from attending a local group that met early, so he attended one nearby in the afternoon. After his wife died, the group became even more important.

Carl was a WWII veteran and his group had other veterans and National Service members close to his age, as well as men in their 70s and 80s. Carl’s first meeting was in February 2016. Carl’s last OM:NI meeting was via Zoom a few days before he lost his battle with cancer. The meeting was set up for him by his family as he wanted to say goodbye to his friends. We all loved him. He seemed to be able to enjoy every minute of his long life. It was an honour to know him.

After he passed, his daughter told us, ‘He did love his OM:NI group and indeed it was the highlight of his week but in fact it gave so much more than those few hours of company on a Tuesday afternoon.  He always looked forward to it and was always on a high for a few days after attending the meeting and this helped with his pain levels. He enjoyed thinking about and researching the topics, so it filled many hours prior to the meeting. It also gave us something to talk about other than doctor appointments and mundane things. He loved the social aspect that developed with the lunch prior to the meeting. He felt he had found friends that would help him if he ever needed it. OM:NI gave him something at a time of life when you are often losing so much.  So, I would like to say thank you to all at OM:NI Greensborough and also to COTA Victoria for supporting these groups.’