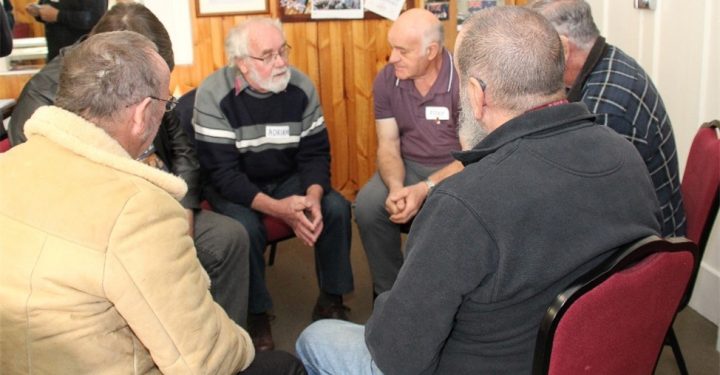 First Meeting in June 2018 at the Bunyip Hall

After our inaugural meeting in the Bunyip Hall back in 2018, Older Men: New Ideas (OM:NI) men’s discussion groups, was described as “a group with an unusual name” by a local newspaper. It’s a wonder that so many men turned up on that frosty, foggy June morning. Some of the men were known to each other, while others were total strangers. A warm smile, a handshake, a self-introduction and a pat on the shoulder. Instant friendships were established.

Tony Arrigo and myself are the Bunyip facilitators. We have a nominal meeting charge of $3 to cover all sundry expenses and have a little left over for incidentals. Our members share a strong bond of friendship which we all treasure. We have had lovely lunches with our wives, BBQs and coffee mornings.

One man that we had never met before our inaugural meeting was John Doutch from Berwick. John was the area coordinator for OM:NI and his aim was to get an OM:NI branch started in Bunyip that would cover a wide rural local area. I remember John standing on the steps of the hall with a broad welcoming smile, introducing himself to each man at the door. John had brought along some members from the Pakenham branch with him.

John is passionate in his quest to start up and support new branches because he can see the support and benefits that OM:NI friendships with like-minded blokes can bring. Since that day, the branch has flourished. During the Covid-19 restrictions, many of the men have stayed in contact with each other via phone or email. No one has embraced the video conferencing technology of communication. Talking to some of the members that I meet in the street, others on the phone or via email, one thing is very evident – they all want to get back to regular meetings.

A small negative point is that quite a few men (and I have heard this from other branch members) don’t think that OM:NI is a good choice of name for our group. OM:NI to a stranger means absolutely nothing and most think that as a first impression this name detracts from the wonderful organisation that we are. However, the peculiar name is certainly a talking point!