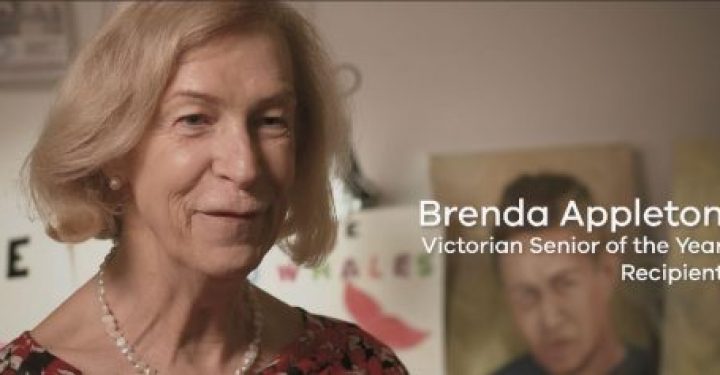 Transgender Victoria volunteer Brenda Appleton, 67, was one of the COTA Senior Achiever Award recipients at the 2018 Victorian Seniors of the Year awards hosted yesterday by the Governor of Victoria Linda Dessau AC at Government House.

Brenda, from South Yarra, was nominated by the National Ageing Research Institute (NARI) for her advocacy, education and research participation on care services for older members of the LGBTI community, particularly transgender people.

COTA Victoria has been one of the fortunate partners of Brenda’s insight through the Safeguarding the End of the Rainbow, a guide done in conjunction with Transgender Victoria to help LGBTI people plan an end of life of their choice taking into account their life experiences.

The publication has been well received across the community and furthers Brenda’s advocacy for human rights, dignity and respect for the LGBTI community and in particular Trans people.

“I volunteer because my life has been difficult. It’s difficult when you don’t meet society’s expectations of gender, when you’re different and, I’m trying to make it easier for those coming behind. We need society to be much more accepting of difference,” Brenda said in an interview about the award.

“I know many have struggled with mental health issues, not because they are mentally ill, but because of the stigma and discrimination they face in our very judgmental world….I have a vision that society accepts difference, whatever that might mean”.

Brenda said she enjoyed being an advocate and contributing to her community by volunteering.

The 2018 Victorian Senior of the Year was awarded to Hamish Russell, 79, for his volunteer work to improve health outcomes in Melbourne’s outer east. In accepting his award Hamish said he was honoured “because it means being visible and not invisible.”

The two award winners were among 18 recipients recognised for their community work during the ceremony by the Governor and the Victorian Parliamentary Secretary for Human Services, Sharon Knight MP.

Older Victorians make up more than 15 per cent of the state’s population and the annual Seniors Awards recognise the enormous contribution made by them.

“Seniors make a tremendous contribution to our community and these awards are a great time to recognise these efforts and say thank you,” Ms Knight said.