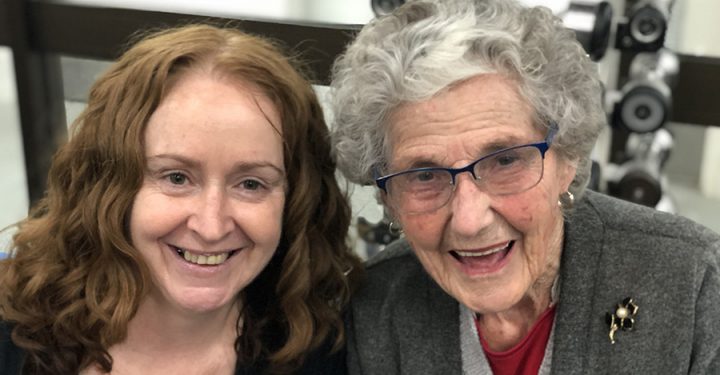 Are you someone who hopes to fit in some exercise among your list of daily activities – but finds weeks passing between sessions? You’re not alone. Research tells us that only 15% of older adults prioritise regular exercise.

The Department of Health recommends that older Australians aim for 30 minutes of moderate exercise activity each day, with two days per week dedicated to muscle-strengthening activities. Regular exercise means we can stay independent and keep up with grandchildren. It’s good for our mood and mental health and can help us make new friends. Balance and fall prevention are some extra positive side effects from undertaking a regular exercise program.

Most of us already know that life is better when we are fitter, stronger and more agile. But how do we stick with it and make exercise a daily activity? Here’s the advice from five women who have been exercising consistently – and reaping the benefits.

Penny (left) had been exercising on and off for years, trying to get fitter and stronger and lose the extra weight that had crept on over time. But Penny’s haphazard approach meant that she wasn’t getting the results she wanted.

Realising that something had to change, 18 months ago Penny made a commitment to herself that she would prioritise her weight training program three times per week at Curves in Blackburn. Two of those sessions were part of the Living Longer Living Stronger program, which includes balance exercises. One small change was telling friends, yes, she would meet for coffee, but only after her workout.

Without changing her diet, Penny’s consistent strength training has seen her lose 8 kilos. Best of all, Penny feels much stronger and fitter to enjoy everyday life.

Heather, Jane and Catherine attend the Living Longer Living Stronger program at Lilydale Squash and Fitness Centre. Collectively, they’ve racked up over a half a century of attendance, so their advice on sticking with an exercise routine is certainly tried and tested.

Heather, who has been attending the gym for 26 years, says there’s no such thing as can’t. She believes her best time was when she had an instructor that understood that age was just a number, and not a pass to avoid trying new things.

Jane, with more than 23 years attendance, says you just have to keep going. Sometimes exercise can be difficult, but when you stick with it, it gets easier. For Jane, the benefits aren’t only physical but also social. Attending Living Longer Living Stronger classes means she sees her friends regularly – and makes new ones.

Catherine, who has been a dancer and also enjoys yoga, has been attending for over 20 years. Catherine believes that you have to make a routine of exercise. Her advice is to just go, even when you don’t feel like it. Once you are there and joining in with the others, it’s worthwhile!

Betty, who recently turned ninety, has been exercising her whole life. There was a lot of sport when she was a young girl and she now attends Older But Stronger (OBS) at Lilydale Squash and Fitness Centre.

‘Just give it a go. And see what you can do. Then see if you can do a bit more next time.’

All five women agree that the best support they’ve had came from instructors who care about them and are trained in how to accommodate their various health conditions – while still helping them become stronger.

Find out more about Living Longer Living Stronger, or find a provider near you.