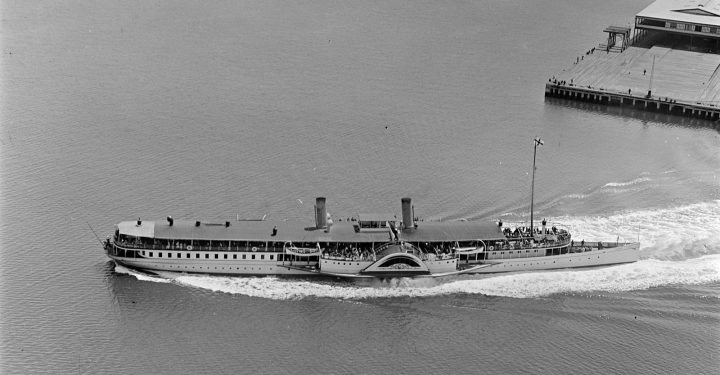 Last month, I introduced the paddle steamer Hygeia, recounting her voyage from Scotland to Australia in 1890 and her 41 years of service in Queenscliff. The Hygeia’s journey to her final resting place in the Ship’s Graveyard is an adventure stranger than fiction.

H.M. Morris, a shipping contractor, bought the Hygeia and stripped her of everything saleable. Deck fittings, cutlery, brass lanterns, lifebuoys, funnels: all willing buyers, many of whom who had sailed the Hygeia down the bay. Even the engines – those that still worked – were dismantled and sent to Bendigo, where they were used to power machinery for a gold mine.

Having been stripped bare, on 25 August 1931, the Hygeia’s empty shell left Port Melbourne, bound for the Ship’s Graveyard. Travelling behind the tug, Eagle, the Hygeia began her journey in light winds, which quickly progressed to a howling gale.

Near St Leonards, the hulk of the Hygeia broke off from the Eagle. Onboard were two former crew members. Their only other companions: sticks of gelignite to be used to send the Hygeia to the bottom. In other words, she was like a floating mine!

After nearly coming to grief in the shallow waters around Mud Island, the Hygeia’s hulk drifted across the bay overnight. Eventually, it came ashore near Rosebud, where the locals thought it would make an excellent tourist attraction – perhaps as a kiosk or museum.

The authorities, however, were adamant that this would not happen, having previously turned down proposals from both Morris – who wanted to sink the Hygeia at Brighton Beach as a breakwater – and the Navy, which wanted to use her as a moving target at gun practice! With the authorities insisting that the Hygeia still be scuttled outside the Heads, poor Morris was left with a contract he couldn’t fulfil. He died broke.

Eventually, in June 1932, the Harbour Trust vessel the Rip towed the hulk and sank her at the Ship’s Graveyard. Even then, the Hygeia refused to go gracefully: it took a number of dynamite charges before she finally sunk from sight.

I wonder if any of the fittings that were sold in 1931 are still in circulation? Perhaps, then, the history of one of Queenscliff’s iconic paddle steamers lives on for future generations.

Source: T.K. Fitchett, Down the bay: The story of the excursion boats of Port Phillip, Rigby Ltd, 1973.