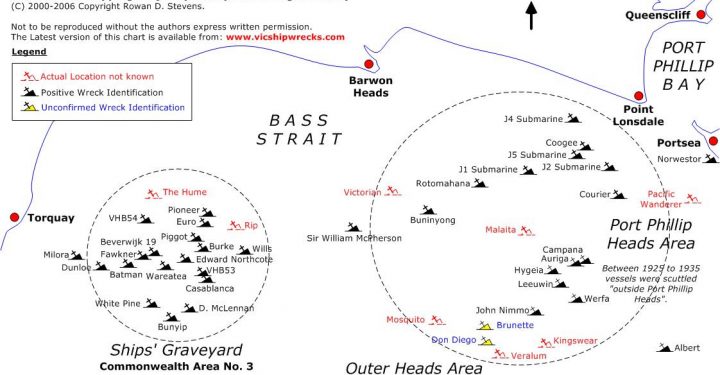 The Ships’ Graveyard lies outside Port Phillip Heads, starting east of Fisherman’s Beach in Torquay and extending through to Point Lonsdale.

The Outer Heads Area of the Ships Graveyard is what’s known as an ‘undocumented area’. In the late 19th century and early 20th century, it was common practice to set discarded ships out past Port Phillip Heads, open the sea cocks and set them adrift – sometimes even ablaze. These vessels often drifted into the Outer Heads Area, where they sunk. Today, we know of at least 26 ships in the area, but there may be more.

In November 1928, the 567-ton barque Norwester ended up on the beach at Portsea – much to the anger of residents that were enjoying a day at the beach. Another mishap occurred in 1932 when two wooden barques were set ablaze off the Nobbies, only to wash up on Phillip Island, still burning. These accidents were the catalyst for the Commonwealth Government’s introduction of sea dumping legislation.

Today, Commonwealth Area No. 3 is the designated Victorian zone for sea dumping of obsolete vessels. Located ten kilometres south-west of Barwon Heads, the area is six kilometres in diameter and ranges in depth from 40 to 60 metres. It’s the site of around 20 shipwrecks. The latest ship to be scuttled was HMAS Canberra, a heavy cruiser that met its end in October 2009. It joined a collection of submarines, steam ships, sailing ships, dredges, steam hopper barges, tugboats, a navy attack class patrol boat, and one of Queenscliff’s iconic paddler steamers, the Hygeia. Next month I’ll share the story of the Hygeia’s amazing journey to its final resting place.