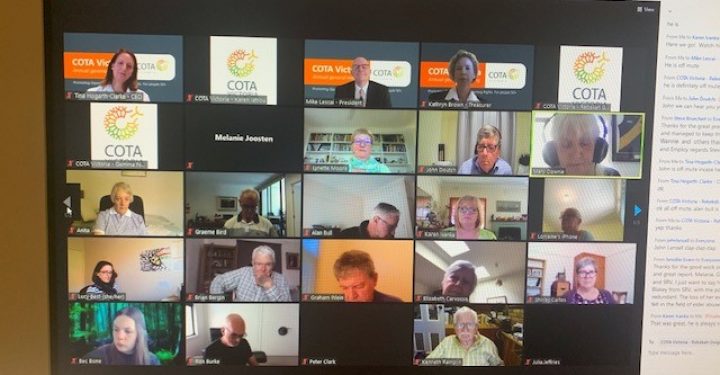 The meeting was held via Zoom on the 25 November.

This was the first time in its 69-year history in Victoria that COTA’s AGM had been held online.

It was a fitting technology innovation for an organisation that prides itself on being positive about ageing and the capabilities of older Victorians.

We thank those who joined us online. For those who were not able to join us, we are pleased to provide some of the presentations that were given.

A highlight was a presentation by Gerard Mansour, Commissioner for Senior Victorians and Ambassador for Elder Abuse Prevention.

Gerard spoke about his role and a recently released report, Ageing Well in a Changing World. The report findings were based on surveys completed by over 2700 older Victorians and a series of community consultations.

The findings covered factors that reduce the quality of life for older Victorians and the attributes of ageing well. Read a copy of Gerard’s presentation.

Another highlight of the AGM was Mike Lescai’s announcement of a COTA Victoria life membership for John Doutch. A peer educator for COTA Victoria for over 16 years, John is also a founding member of COTA’s OM:NI men’s discussion groups. Read more about John’s award announcement.