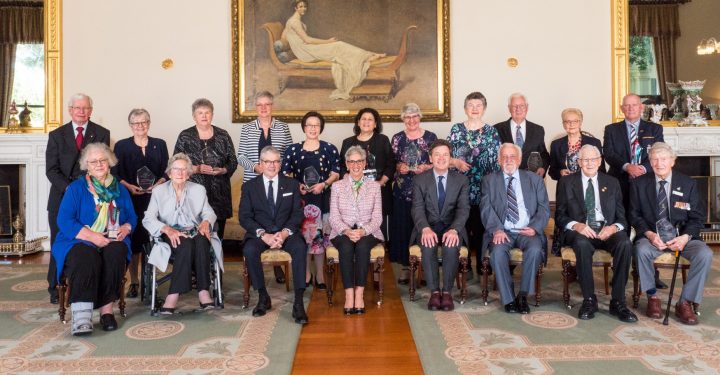 A group of 11 people from across the state were recognised as COTA Victoria Senior Achievers at a prestigious ceremony at Government House on Tuesday 22 October. The COTA Victoria awards were part of the 16 Senior of the Year Awards that were presented on the day.

The Victorian Senior of the Year Awards acknowledge older Victorians who volunteer to help, support and encourage others in their communities. The awards also recognise community organisations or businesses that create age-friendly communities through a focus on inclusion and active ageing. The COTA Victoria Senior Achiever Awards are a partnership between COTA Victoria and the Department of Health and Human Services.

The Premier’s Award for Victorian Senior of the Year was presented to Ms Margaret Young, 80. Ms Young has volunteered for the past 11 years for the Eastern Palliative Care Association, a specialist community-based palliative care service that supports people in the community with a terminal or life-limiting illness.

“Volunteering is often seen as selfless, and indeed one does give a lot of oneself to it,” Ms Young said.

She said she was giving back some of the blessings that she had received through volunteering.

“But there were [also] other important aspects: I wanted to be challenged; intellectually and ethically. I did not want to be on the margins of society. I wanted to be engaged and still involved. And I have been.”

Mr Louis Hamon of Numurkah was one of 11 people to receive a COTA Senior Achiever Award. Mr Hamon, 91, was nominated for his contribution to arts and culture in the Goulburn Valley.