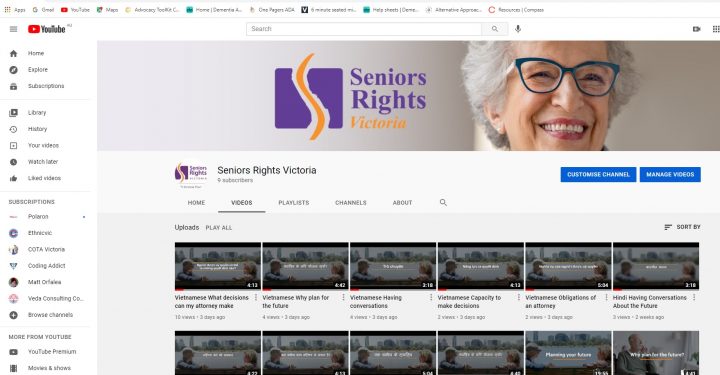 In May, we reported on Seniors Rights Victoria’s (SRV) new series of videos about planning for the future for people with dementia. Each video features a case study followed by a discussion of the issues with a lawyer and an advocate from SRV. The videos area a new way of sharing information that had up until now only been delivered at face-to-face information sessions with Dementia Australia. Video is a great way to communicate in the face of lockdowns and ongoing restrictions on face-to-face meetings.

SRV officially launched the videos at its WEAAD event on 15 June 2021. They are now featured on YouTube and on SRV’s new website alongside discussion guides and handouts.

Thanks to a grant from the Victorian Law Foundation, we are dubbing the videos in Hindi, Vietnamese and Arabic – languages in which there are few existing resources. The Hindi and Vietnamese videos are now available on SRV’s YouTube channel. The SRV team will also be adding the new videos to their SRV website, along with some translated resources from the Office of the Public Advocate.