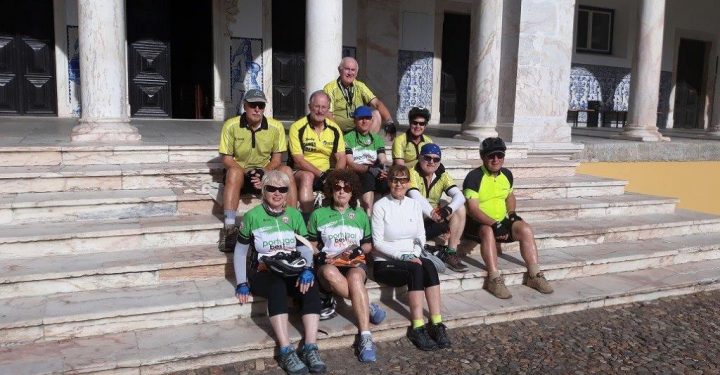 Some of the 15 on tour in riding gear. The author is hatless on the second top row.

In late 2017 I was pondering what to do the following year when an email dropped into my inbox. My bike riding club was organising an overseas trip for 2018 and there was a cancellation. I immediately rang the tour leader and after a short chat, my plans for 2018 were made.

The trip was made up of two tours. The first, a 16-day walking holiday on the Camino de Santiago, an ancient pilgrimage walk from the eastern border to the west coast of Spain. The second, an eight-day bike ride touring the castles of Portugal.

The Camino saw me walking anywhere from 10 to 25 kilometres per day in temperatures of up to 35 degrees. We passed through hilly country and stone-built, working villages that were hundreds of years old. Thousands of people from around the world make this pilgrimage each year, and some villages rely on the pilgrims’ custom for their existence.

After a welcome three-day break, we began the bike ride. Portugal is a hilly country and of course, castles are built at the top of large, steep hills. Some days were hot and dusty, with a headwind. On one day we rode through heavy rain on the edge of a hurricane. But every day was seemingly uphill. We were all amazed at the workmanship that went into the construction of these beautiful castles, some very large, and hilltop villages built hundreds of years ago.

Fifteen of us started the adventure and 15 finished, with only a few having to attend hospitals along the way. After ten months of shared preparation and training, followed by our incredible holiday experience, the friendships that were formed continue today.