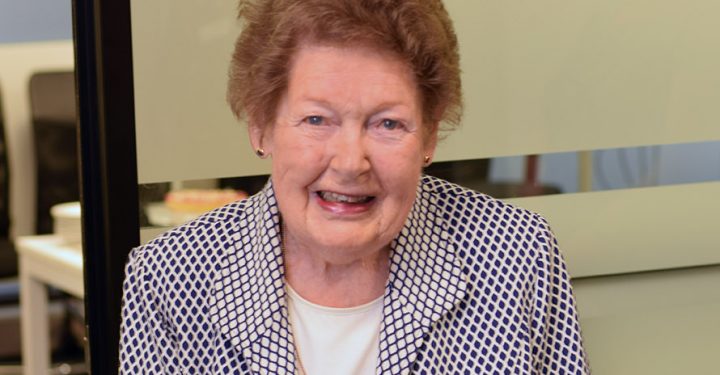 Experiencing a piece of world history and making history for COTA Victoria were two things life member Shirley Ramsay touched upon when she visited us last month.

Shirley attended COTA Victoria’s headquarters in central Melbourne for the dedication of the Shirley Ramsay Room – one of our two main meeting rooms.

Shirley occupies a unique place in the COTA Victoria story. She joined the organisation in 1962, then known as the Old People’s Welfare Council of Victoria, to establish our information service.

The following year, the staff association of Melbourne department store Georges provided funding for Shirley to travel to England and the United States. A social worker, Shirley was keen to learn how overseas counterpart organisations worked.

She had not counted on everything coming to a halt when she was in Los Angeles the day US President John F Kennedy was assassinated. As an outsider, Shirley felt at a loss among Americans mourning the death of one of the key figures in history.

“I did not want to intrude on their grief, so I kept to myself,” she recalls.

What Shirley learned from her trip provided key insights for the Old People’s Welfare Council. It became the Victorian Council of the Ageing in the late 1960s, with Shirley at its helm as Director.

Looking for new challenges, in the late 1960s Shirley moved on to work for Nunawading Council in its social work department. She returned to COTA Victoria in the late 1980s, firstly as a member of the Board and then working part-time for Seniors Information Victoria.

Shirley retired from COTA Victoria in the last 1990s and was recognised by the Board in 2011 with life membership.