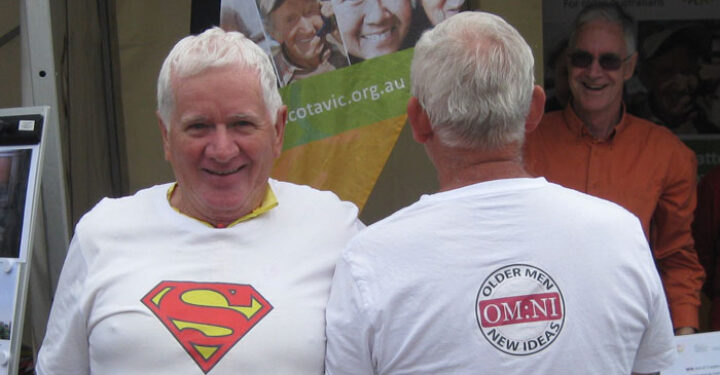 The Narre Warren Older Men: New Ideas (OM:NI)  men’s discussion group adjourned for morning coffee to feast on the culinery delights of Bruce, the group’s catering officer. The following month, Bruce, an ex-copper, was due to ferry a busload of Police Widows to some exotic Victorian country town, so his temporary replacement, ‘007’ Bernie, had been advised to take careful notes on the spread.

Members were eagerly hoeing into Bruce’s cooking when a distant cry was heard from the main hall. It was the facilitator, Colin, rebuking some unnamed member for shutting the meeting room door, leaving mobile phones and car keys behind the vault-like entrance.

Mick tried his Seniors Card to swipe the lock, with no luck. Then came suggestions to ‘Ram it!’ –  with Mick offering his builder son to make good any damage. Imagine ten members, each manning a section of wooden ram to knock down the door. But a sensible voice cut in: ‘Come on, guys, it’s not the Bastille.’

Colin contacted the City of Casey’s holder of keys. ‘That’ll work… if the builder supplied a key,’ Mick remarked to Barry.  The holder of the keys arrived and it was as if Mick had written the script! The key-holder tried each key on the keyring but not one fitted, at which point blame was levelled at the builder – a response commonly known as ‘Bureaucratic Defence Mode’.

So, there we were, back in Bastille mode – but then the phone rang. It was the head of the Hall Committee advising that the elusive key was in the office. The key was obtained and we all lived happily ever after, thus proving the greatest skill we all possess is communication!