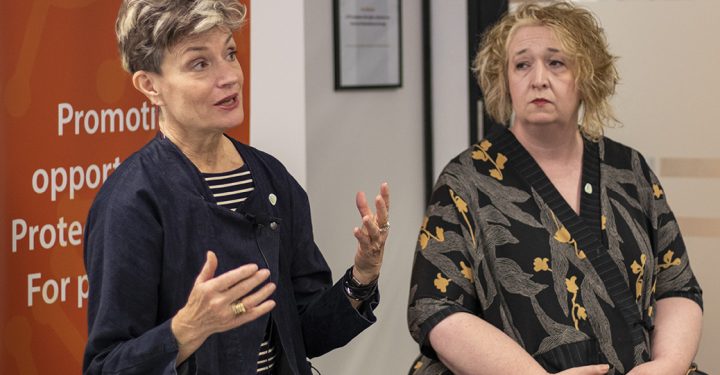 US ageism activist Ashton Applewhite enlightened and inspired guests at COTA Victoria yesterday at an invitation-only conversation as part of her Australian speaking tour, which included a TEDx Talk in Melbourne on Sunday.

The author of This Chair Rocks: A Manifesto Against Ageism, Ashton is a leading spokesperson for a movement to mobilise against discrimination based on age. She speaks widely, at venues ranging from universities and community centres to the TED main stage and the United Nations.

Ashton’s Australian tour is being hosted by EveryAGE Counts. This is an advocacy campaign involving high-profile organisations and individuals who are spearheading a movement to shift social norms and positively influence the way people think about ageing and older people. The campaign asks all Australians to take action against ageism by signing the EveryAGE Counts pledge.

At COTA Victoria, Ashton spoke with an audience for whom fighting ageism is an issue of personal commitment or relevant to the work they do. She challenged people’s full understanding of ageism and highlighted a free toolkit of resources developed to help overcome age bias, called Old School. Ashton was then interviewed about her work by the EveryAGE Counts team before taking questions from the audience.

As a result of the talk, COTA Victoria will build on our everyday work combating ageism with a webpage linking resources and support for individuals, community organisations and businesses tackling ageism. This will include a snapshot of Ashton’s COTA Victoria conversation.

In the meantime, you can read COTA Victoria’s Challenging Ageism publication.