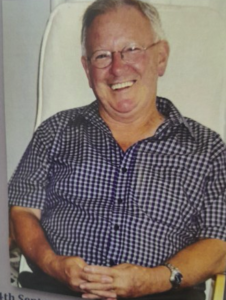 This month we remember Bernie Bond, who joined COTA Victoria as a volunteer in 2005. As a peer educator, an advocate for age-friendly communities and a founder of Older Men’s Discussion Groups (OM:NI) in Melbourne’s south-east, Bernie made an enormous contribution to the wellbeing of older Victorians.

Bernie joined COTA Victoria as a volunteer peer education in 2005. After completing our Challenging Ageing Programme (CAP) in the City of Casey, he joined the same program as a facilitator. Later, he went on to facilitate discussion on topics like men’s health, medicines, memory, anxiety and depression, and myths and stereotypes about ageing.

Having seen the positive effects the CAP had on older men, Bernie was actively involved in creating Older Men’s Discussion Groups (OM:NI) in Melbourne’s south-east. Bernie’s thoughts on OM:NI and ageing positively were included in an unscripted video made by the City of Casey and available on the COTA Victoria website.

Bernie lent his knowledge and enthusiasm to the Shire of Cardinia in their successful campaign to be recognised by the World Health Organisation as an Age Friendly Community.

In all of his voluntary work, Bernie displayed dedication to the task with energy, humility and his trademark humour. He personified the positivity and capability that older Victorians contribute to the broader community.

RIP Bernie. We’re all the richer for knowing and working with you, and you will be forever in our thoughts.