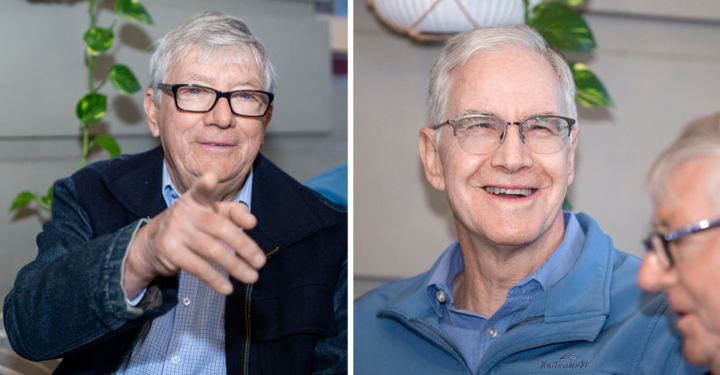 From left to right: John Doutch and Alan Bull

John Doutch’s remarkable career as a volunteer had a rocky start.

In 2003, just six months after retiring, he found himself asking (in his unique style): ‘S**t, what am I going to do today?!’ Fortunately, John spotted an advertisement for a COTA Victoria positive ageing course. The course had space for 20 participants – and was filled. But John persisted until he became ‘participant 21’. That persistence led to John’s involvement with COTA as a member, volunteer and peer educator – an involvement that continues today.

John is candid in describing his initial motivation for volunteering as being ‘selfish’.

‘I needed an outlet to pass on my career and life experiences. I didn’t expect to get anything back nor did I believe I had a lot of value to offer.

‘That changed and I began to understand the genuine satisfaction that comes from helping others and the real contribution you can make to your community,’ John says.

His life experiences included postings in Vietnam and Singapore with the Department of Defence; a long period with the Australian Wheat Board; and a challenging 15 years managing tenpin bowling centres.

John’s volunteering has been recognised with a number of awards including the City of Casey Senior of the Year award, the Minister of Health Volunteer Award, the COTA Victoria Senior Achievers Award and COTA Life Membership.

More recently, John’s volunteering has become very personal. His wife has serious health issues, and John has worked hard to obtain an adequate Home Care Package for her. He’s now putting that experience to good use in COTA Victoria’s Aged Care Navigators program, where he talks to people about their Home Care Package options.

He is also contending with his own serious blood disease, which he recognises is life-limiting.

‘With volunteering, retirement has turned out to be a rewarding stage of my life. I plan to get on with it as much as I can,’ John says.

When you first ask Alan Bull about his volunteer experience, he says he ‘hasn’t done much’.

But then he talks about his various community committee roles and his time as a volunteer swimming coach and assistant with his son’s sporting clubs. Next, he mentions his longstanding involvement with COTA Victoria, running camping and outdoor activities for older people. And on top of that, his work with COTA Victoria’s OM:NI (Older Men: New Ideas) groups.

Alan’s unassuming approach belies the value he – and countless others throughout Victoria – provide through their voluntary support of organisations small and large. It’s been estimated that over two million Victorians aged over 15 volunteer their time and skills – that’s around 40 per cent of us.

Like COTA Victoria, Alan has just celebrated being 70. Or as he describes it: ‘I just blew through that. Was not sure what to expect!’ He sees his time ahead as a great opportunity to step up his volunteering.

‘I have an interest in active ageing and want to continue my involvement with COTA Victoria in that area.

‘I also want to help out with improving aged care. As a community, we need to do better.

‘As long as you feel you are contributing, then volunteering is valuable for you personally and for those you are assisting,’ Alan says.