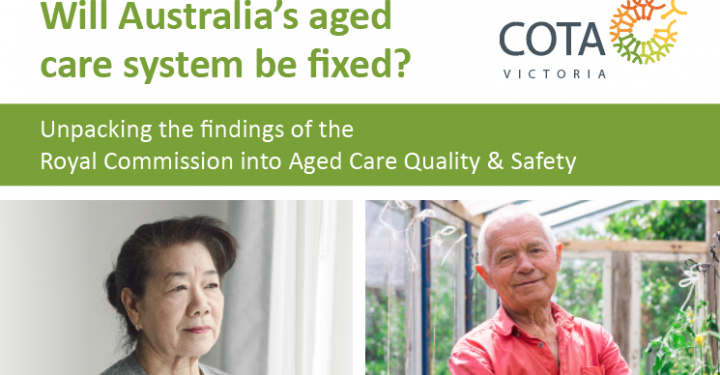 Onus now on the Australian Government

The final report of the Royal Commission into Aged Care Quality and Safety, released earlier this month, puts the onus on the Morrison Government to address systemic issues with home care, nursing home regulation, staffing and transparency, according to Council on the Ageing.

‘When it comes to the crisis consuming our aged care system, the Royal Commissioners are unanimous in identifying the issues of neglect, abuse, indifference and poor leadership,’ said COTA Australia Chief Executive, Ian Yates AM.

‘It’s now the Federal Government’s job to map out the structural reforms needed to build a safer, accessible and transparent system in an accountable way.

‘The fact that there are a few alternative recommendations from the Commissioners on the best way to manage and fund the aged care system in no way lets government off the hook. There are no barriers to commencing urgent and long-awaited reforms.’

For a simple overview of the recommendations, including links to the final report, see What Now for Aged Care? For any additional queries, please email agedcareroyalcom@cotavic.org.au

We’re hosting a free online event to unpack the findings from the Royal Commission. Seniors Rights Victoria Education Coordinator, Gary Ferguson, will facilitate a conversation unpacking the recommendations and commenting on the political appetite for change with featured speakers:

There will also be reflections from some of the 300+ older Victorians who connected with COTA Victoria’s engagement work over the last two years. We’ll be asking what older people think about the Royal Commission’s findings, and whether its outcomes can inspire the generational change needed for our broken aged care system.

Register online at COTA in Conversation.